There is a grave in the churchyard of St. John the Baptist’s church in Pinner that stands apart – or rather above – from the rest. A stone, triangular monument protrudes out from the ground, and thrust through its centre is a single coffin, inscribed on either end to the man and woman the monument is dedicated to: William Loudon, and his wife, Agnes Loudon.

A number of stories surround this odd, in some ways occult, monument. The most intriguing is the one told by Charles Harper in 1902, suggesting that the coffin hangs because it was decreed by the church that William Loudon would only retain his property so long as he remained ‘above ground.’

No doubt having meant that the property would be retained so long as Loudon still lived, the legend would suggest that Loudon’s son, in his burgeoning career as a landscaper and cemetery designer, found a clever workaround. The mysterious words cast into the monument’s iron work – ‘I byde my time’ – might also suggest a certain the truth of this tale.

Others, however, suggest a more mundane – though in some ways no less interesting – narrative: that the coffin is a sign of the social climbing which was prevalent in nineteenth century Pinner. This tale would have the monument designed to show, literally and figuratively, that William Loudon, and later his wife, were above the rest in the churchyard, both living and dead – and perhaps closer to God also.

In this, even if the monument isn’t an artefact of one son’s attempt to outsmart the church, as a physical symbol of the Loudon family’s status and a reminder of the socio-political games that took place some two hundred years ago in Pinner, it’s interesting nonetheless.

However, the monument also has significance as the first foray into landscaping by someone who would, eventually, be made famous for it – a man by the name of John Claudius Loudon, the son of the two the landmark is dedicated to. Loudon, born in 1783 in Scotland, developed his skills in landscaping thanks to his father’s employment as a farmer – gaining for himself a practical knowledge of plants and farming.

It was this work alongside his father that brought the family to Pinner, to the Woodhall Farm in 1806, where the two experimented with ‘Scotch’ farming, hoping to prove to the wider public how effective this method was. However, his father died not long after in 1809, leading to the erection of the monument that we started with, and to Loudon’s departure from Pinner – and from his mother, who would remain in Pinner until her death in 1841.

In the years that followed, Loudon went on to develop the Victorian ornamental cemetery, in the process challenging and changing the popular ideas about them. Loudon vehemently opposed the way that cemeteries in the early nineteenth century were styled – arguing that cemeteries should never be mistaken for a park or country residence as they often were; that cemeteries should rather be a combination of moods, and notably of both architecture and landscape to ensure cemeteries would be unmistakably distinctive.

It could be seen, then, that the style of so many cemeteries today is owed to John Loudon and, in this, Pinner and the floating coffin that played a role in starting this career – a career that left cemeteries, and in turn our interaction with the dead and passed, changed profoundly. With this in mind, Pinner’s floating coffin, as much as it is the site of an intriguing local tale and all the myths and rumours that inevitably come with such tales, is also a reminder of the textuality that our past inhabits and which so often goes unnoticed.

But whether as the focal point of an interesting local story, a relic of the social ladder climbing of the nineteenth century, or as the first work of a man who would redefine popular ideas about the dead and their keeping, it’s safe to say that, should the weather be warm and you find yourself in the Pinner area, the odd and yet deeply historical landmark of the floating coffin would most definitely be worth a visit. 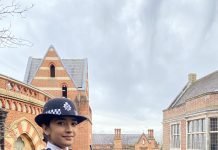 Behind the Badge: Being an Asian female police officer in Harrow