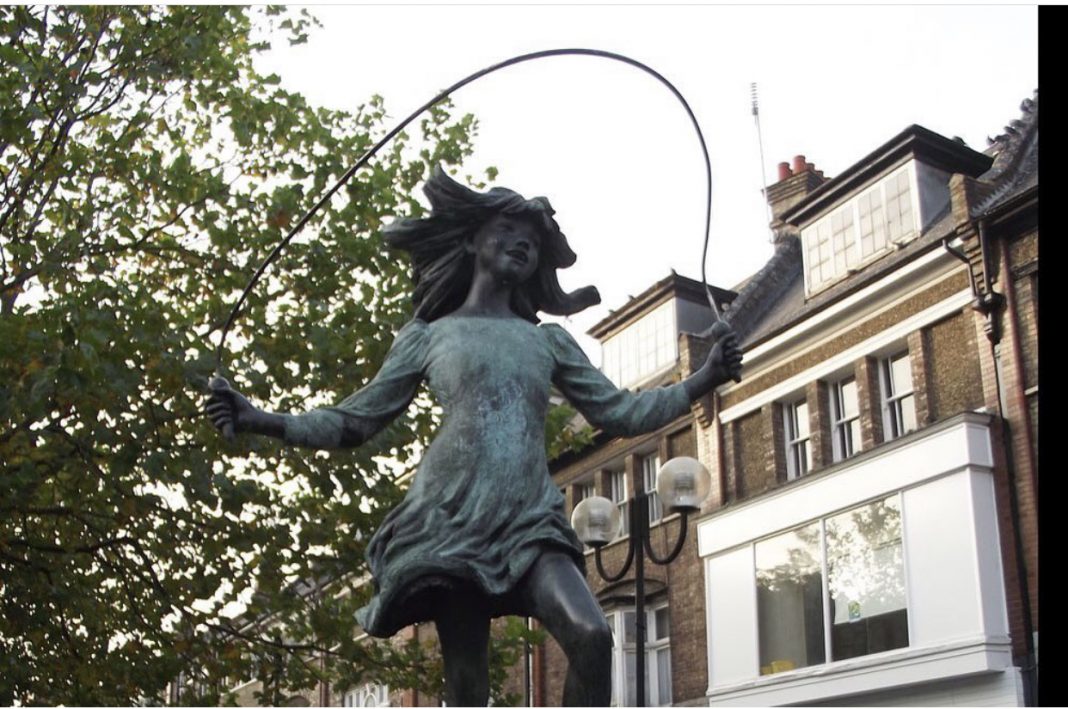 Harrow has, as the past few weeks have perhaps shown, no shortage of iconic landmarks and locales. Between the Zoroastrian Centre or the numerous graves on the hill, each with their own interesting story to tell, the borough has a bountiful of memorable things to see.

The subject of this week’s article is but another on this ever-increasing list, but one that, perhaps is one of the most visible.

For as long as I can remember, the skipping girl in Harrow town centre has drawn my attention. The bronze statue, now an oxidised green, stands apart along St. Ann’s Road – isolated in many ways. It depicts a laughing girl in dress skipping – giving way to the name that she is now known by.

Skipping Katie was unveiled in 1987, originally to celebrate the opening of the new pedestrian area – which also remains a well-used feature of the area to this day. Initially, there was some mystery over who the real ‘Katie’ was, and as a result, much focus fell on the statue’s creator, one James Butler. Butler, a Warwickshire artist and sculptor, had made the statue after winning a public art commission – where a committee of councillors, officers and representatives from various sources like the Harrow Heritage Trust and the Harrow Arts Council, judged the various submissions that they had invited.

His inspiration for Katie, as it later emerged, was in fact his own daughter – also, and appropriately, called Kate. He had been inspired watching Kate in their garden, and thereafter chose to model his submission to the commission after her – in so doing immortalising Kate as one of Harrow’s most iconic landmarks.

Reflecting on her statue recently, Kate said that it was ‘incredibly flattering that the statue was named after me. It’s always been funny to think of all the people in Harrow who over the years have said “let’s go and meet under Katie!”’ James Butler also commented on the statue at this time, saying ‘It was always one of my favourite pieces because of the sentimental value with it being based on my oldest daughter Kate.’

This truth behind the statue in many ways adds to the landmark, with something so enduring having emerged from something so simple, so innocent – a father just watching his daughter playing in the garden, and watching the happiness on her face. It may be worth thinking about when next you find yourself in the town centre, and beside the still-skipping Katie on St. Ann’s Road.

Of course, this does not cap off the full list of Harrow’s public. Near to Katie is the mural along the walls of the underpass in Harrow centre, depicting various sites across the borough like Old Redding; whilst another mural can be found at the Harrow and Wealdstone station commemorating the train crash that occurred there some sixty years ago – the anniversary of which was only a few weeks ago, and of which was the subject of an earlier Harrow Online article.

Yet there are some examples of public art that remain mysterious – such as the ‘drinking fountain,’ found at the junction of High Street and West Street, whose purpose, despite my best efforts, remains unknown.

There are plenty others too, so it’s always worth keeping an eye out when about in the borough – whether you’re near Skipping Katie in Harrow central or on the hill, next to the ever-mysterious drinking fountains.