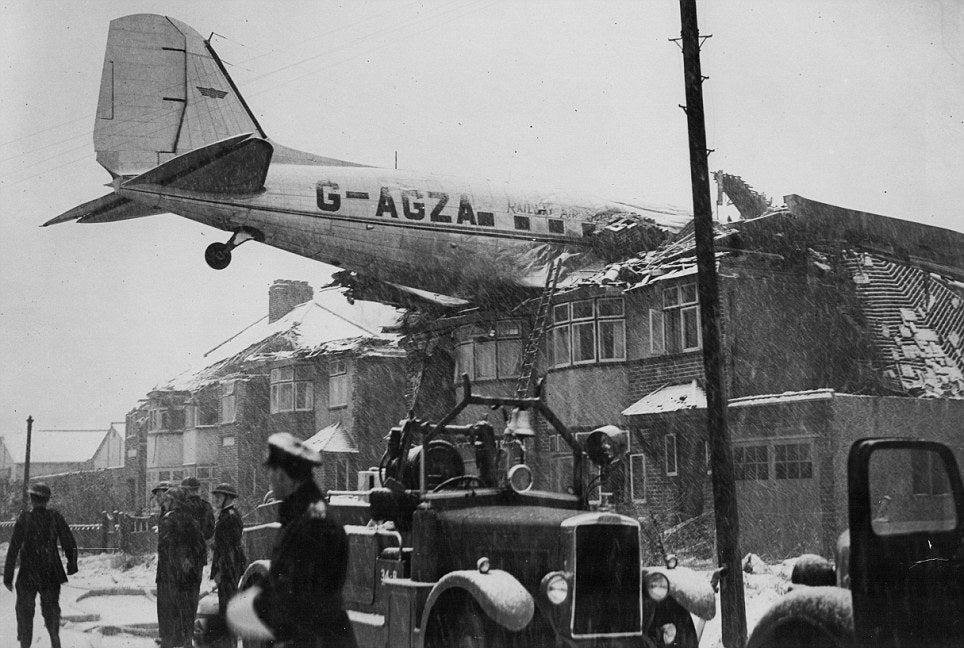 These days, we’re used to the sight and sound of aircraft in the skies above our borough, including those flying to and from Northolt but, in 1946, a Ruislip resident got a view which was a little too close for comfort.

The Railway Air Services was launched in March 1934 and was co-owned by four railway companies and Imperial Airways.  Created as a domestic airline operating from London’s Croydon airport, the service ran between London and Scotland, passing through Birmingham, Manchester, Liverpool and Belfast.

During the 1940s, the Royal Air Force commandeered the service for ‘routes of national importance’ to carry priority passengers and mail throughout the war years.

On the 19th of December, 1946, Railway Air Services Dakota was scheduled to fly from Northolt Airport to Glasgow, on behalf of Scottish Airways, and was carrying four crew members and one passenger.

That December had been a particularly cold one with a fair amount of snow and, the Dakota’s departure from Northolt was delayed due to the need to de-ice the aircraft before take-off.

In fact, due to the weather, the airport had been closed for over an hour to all incoming and outgoing traffic.  As the Dakota waited on the runway, the ambient temperature took a nose dive and fresh snow began to fall – snow which instantly froze on the aircraft’s wings.

After this prolonged waiting time, the Dakota’s pilot finally received clearance to take off and, running the engines to 2,500 RPM, began to accelerate down the runway.  Afterwards, the pilot noted that, on take-off, he struggled to gain any height as the ice on the wings disturbed the aircraft’s air-flow but, by this time, it was too late to abort the flight.

The pilot desperately continued to try to make the Dakota climb to the required height – a battle that he was destined to lose.

Flying only a few metres above ground, the aircraft left the runway and headed straight down Angus Drive; still unable to reach the height required.

The Dakota’s short journey ended as the left wing connected with some residential rooftops and, spinning through 90 degrees, the plane eventually came to a halt on top of numbers 44 and 46 Angus Drive in Ruislip. 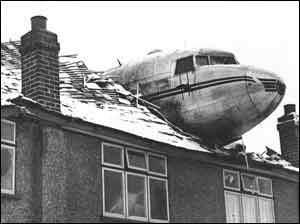 Although the aircraft was severely damaged, miraculously, the crew and passenger were unhurt – although the Radio Officer, Murdoch, had a narrow escape due to the fact that he wasn’t in his seat at the time of the impact – a seat which, during the crash, was skewered by jagged metalwork.

Even more miraculous was the fact that Irene Zigmund and her four month old son were at home at number 44 at the time and, not only were unharmed but, Irene revealed afterwards that the incident didn’t even wake her napping son.

In the days following the incident, a rumour began that, having extricated themselves from the aircraft, the crew and passenger descended into the loft of the house, climbed down the loft ladder and then strolled down the stairs and out of the front door – whether this is true or simply an urban myth, we’ll probably never know.  Thankfully, these days, Angus Drive is a little more peaceful!