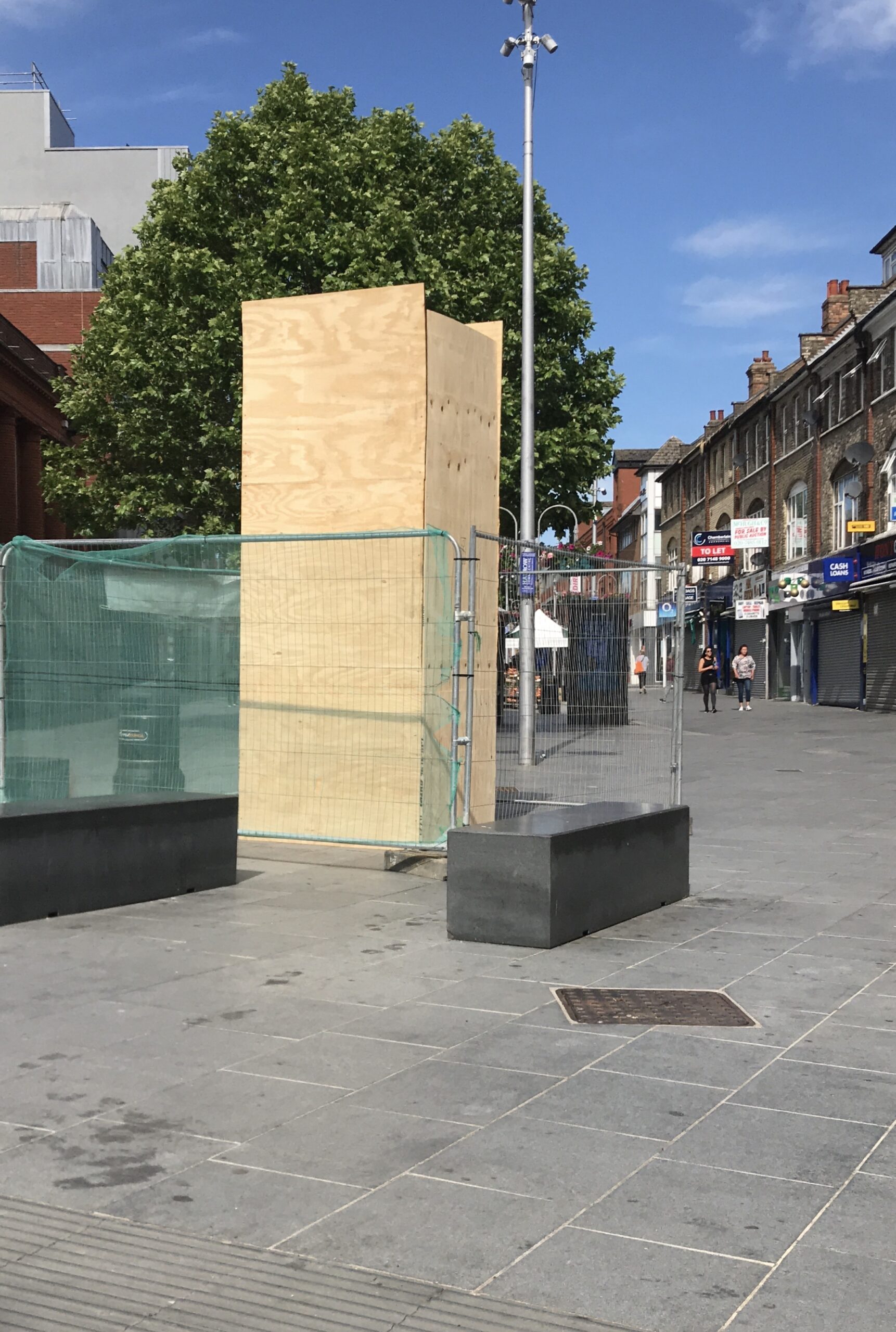 The famous Katie statue in Harrow Town Centre has been boarded up ahead of the Black Lives Matter protest today (Saturday 13 June.)

The statue has been in Harrow since it 1987 and is now completely boarded up as fears grow that someone may vandalise the statue in a similar way to those seen in the London protests. The statue does not have any connection to slave trading.

The protest is being organised by Labour Party Left Harrow East councillor, Pamela Fitzpatrick. The peaceful demonstration will start at Katie’s statue in the town centre and people attending have been advised to ‘mask up, stay two metres apart and bring placards and noise’.

Harrow Council showed their support for the campaign by lighting up Harrow Civic Centre with purple lights. In a Facebook post the council said: “‪We stand in solidarity with everyone who experiences racism, discrimination and inequality. Here is our building tonight lit up purple in support of #BlackLivesMatter ‬”.

It has been revealed that the Black Lives Matter campaigners want to rid the UK of up to 60 statues they say had links to the slave trade. A website has been set up that’s lists the all of the statues, one of which is Nelson’s Column in Trafalgar Square.

After the Sir Winston Churchill statue was boarded up in Parliment Square, broadcaster and journalist Piers Morgan tweeted: “This photo shames Britain. The fact Sir Winston Churchill’s statue has had to be boarded up to stop people vandalising it is disgraceful. He saved our country from the Nazis – and THIS is how we repay him? Appalling.”

Cllr Pamela Fitzpatrick said: “We are living in unprecedented times in the middle of a horrendous pandemic.   No one wants to be going to a public protest but I, and many others feel compelled to do so.  The public killing of George Floyd has been a wake-up call for some and the catalyst for an uprising of anger.  That anger is not limited to one death, shocking though it may be, but the culmination of decades of injustice.

“Report after report shows that austerity has impacted most markedly on the Black community.  The Windrush scandal and the hostile environment have helped to fuel racism, poverty and homelessness.

“The COVID-19 crisis has had a disproportionate impact on the Black community.  There is overwhelming evidence that Black people are more likely to be subjected to police ‘stop and search’ and that racism exists within the criminal justice system.

“Instead of trying to address these serious issues we have a Prime Minister and many MPs who openly make racist remarks. We have had these same battles over and over and it has got to change.  On Saturday we come together in peaceful protest to demand systemic change because in the words of Rosa Parks ‘It is better to protest than accept injustice.”