HomeNewsSouth Harrow Market retailer speaks out after man with hammer attacked his...
News

June 13, 2020 18:17
By Finley Harnett
Facebook
Twitter
Pinterest
WhatsApp
By Finley Harnett
The owner of a South Harrow Market coffee kiosk today said he is “struggling to sleep at night” after a man smashed the windows of his kiosk with a hammer on June 6.

Father-of-three Paramalingam Mathievanan, 43, who owns Coorg Kaapi on Northolt Road, spoke to Harrow Online after a video clip emerged of the shocking incident, which has been viewed almost 200,000 times at the time of writing.

The South Harrow-based business owner, who has been in charge of the coffee bar since June 2019, said the attack happened after he challenged a man who was urinating near the kiosk at around 12:30pm.

“I asked him to move away so I could serve my customer,” Mr Mathievanan said. “He then started shouting at me and told me: ‘I will come back with a hammer.’”

Mr Mathievanan said he did not take the threat seriously. But a few minutes later, the perpetrator returned, armed with a hammer.

“I was making a coffee for another customer when suddenly I heard a sound. I turned around and saw him smashing the windows of my kiosk before he started running away.

“I chased him but then he started showing the hammer to my face — I didn’t want to take any risks. So I went back to the kiosk to get my phone and take a picture of him but he managed to get away on a scooter.” 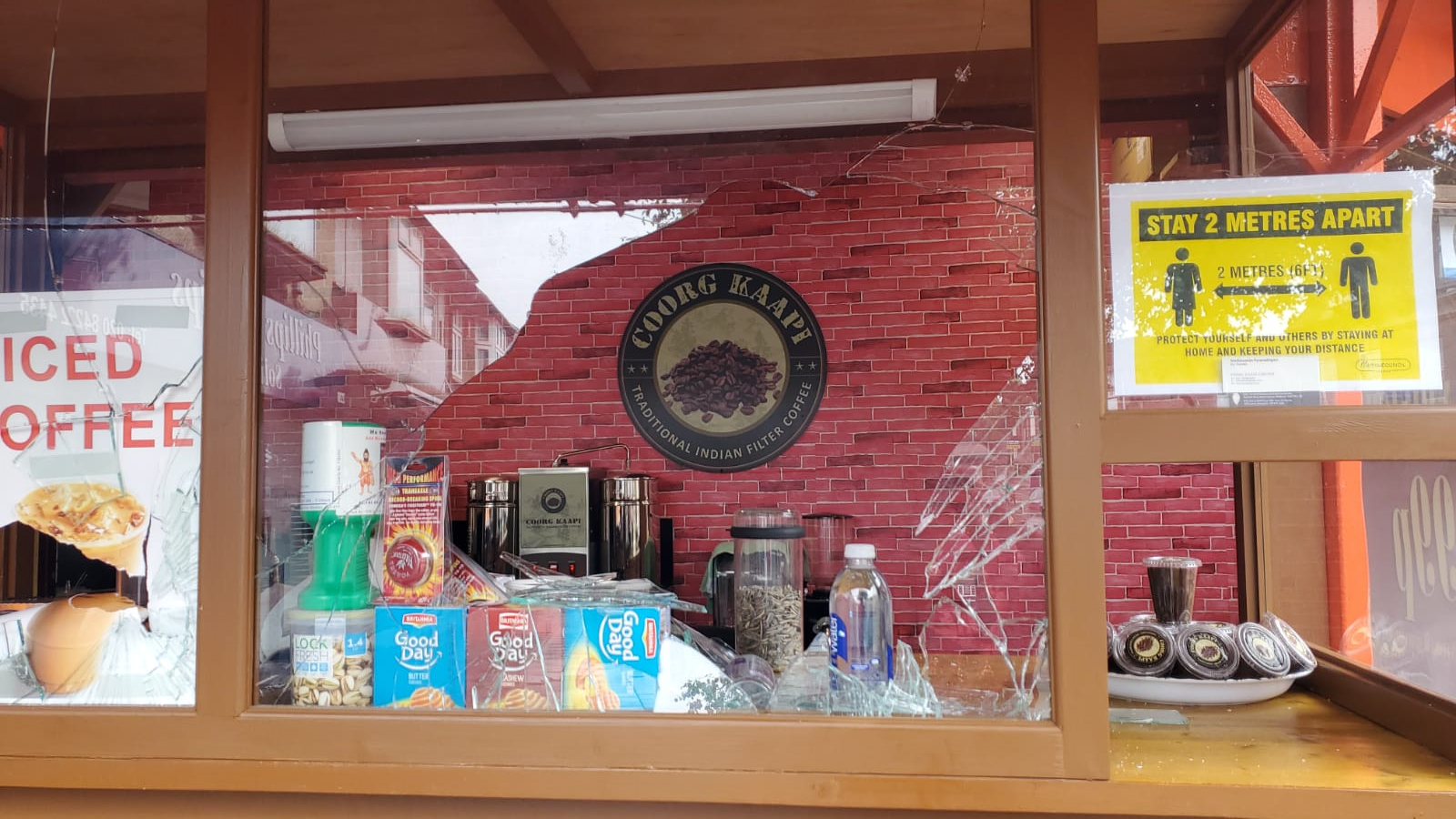 The windows of the kiosk were destroyed after the incident on June 6 (Credit: Paramalingam Mathievanan)

The married man, who has lived in the Harrow area since 2005, said he was struggling to meet the cost of the damage, which is expected to run into hundreds of pounds. The business has already suffered a significant financial hit due to a drop in trade since lockdown was imposed.

“My business is going, I’m worried, I’m struggling to sleep at night as I’m so worried. I don’t want anything to happen to my kids either — it looks like it’s not safe here now,” he said.

Coorg Kaapi remains open for business, and Mr Mathievanan expressed his gratitude to customers who have donated cash to help cover the cost of repair.

Labour Councillor Peymana Assad, who represents Roxeth, said: “The incident at one of the kiosks in South Harrow Market is an unacceptable and appalling attack on a local business just trying to make a living.

“I have spoken to Mr Mathievanan and offered him the Council’s on-going support. Many local businesses have suffered during the COVID-19 pandemic and are only just starting to get back on their feet. I would urge my residents in South Harrow to support Mr Mathievanan by going to buy a coffee or snack from him, to make sure his business recovers from this appalling attack.”

The police are investigating the incident. Harrow MPS tweeted on June 12: “Police are aware of a video circulating on social media following an incident in #Harrow. Officers were contacted at around 12:38hrs on Saturday, 6 June.

“An investigation is ongoing. There have been no arrests. Anyone who recognises the man is asked to call police or tweet @MetCC ref CAD 5795/12 June.” 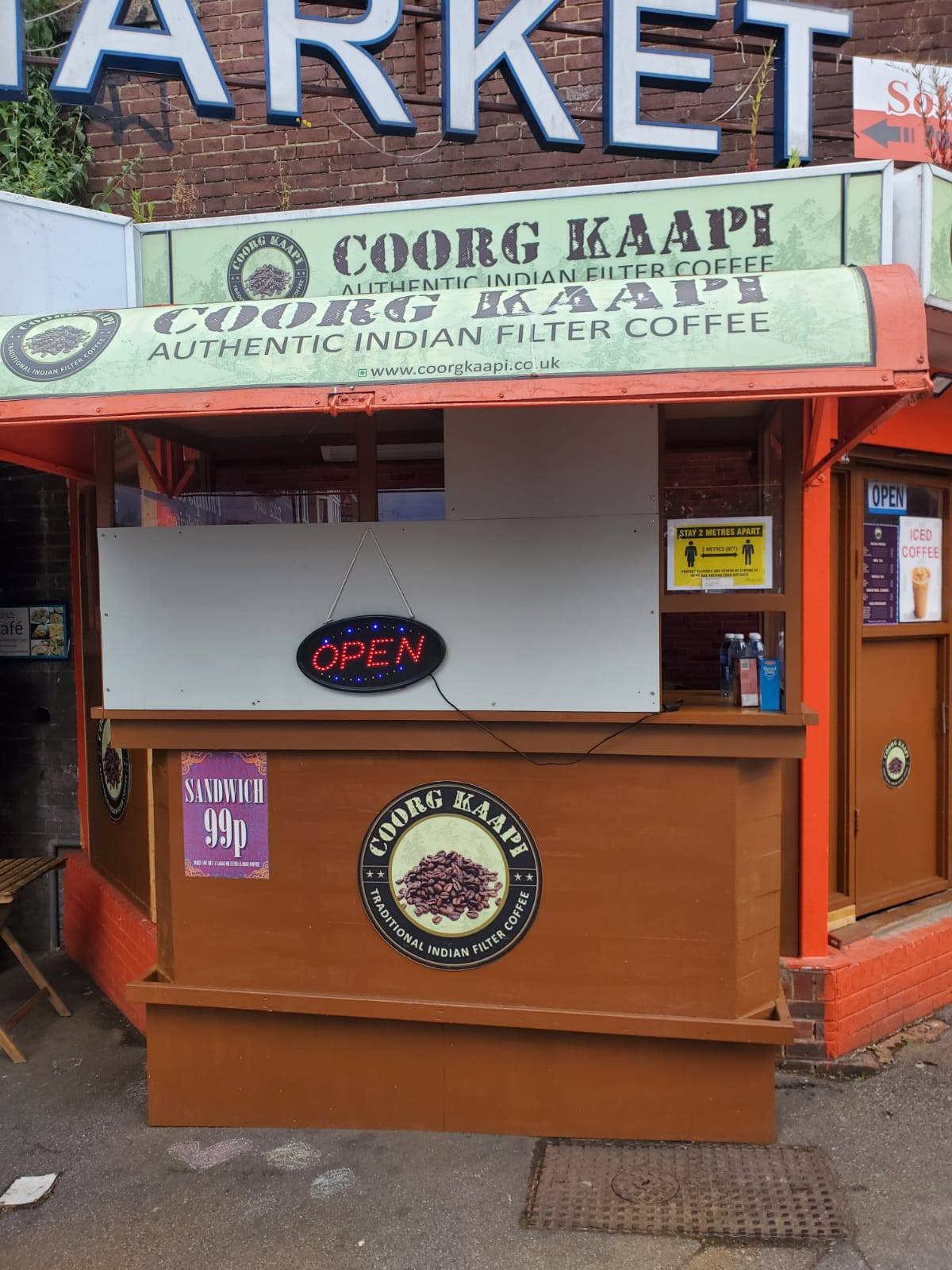