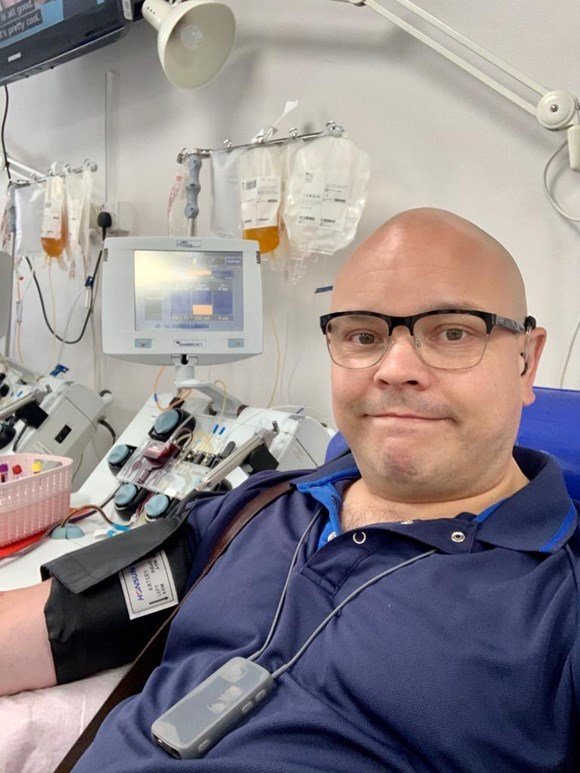 COVID-19 survivor Richard Webb-Stevens is taking part in a national trial to see if his blood plasma could help treat people who are seriously ill with the virus.

Asthmatic Richard, a paramedic for London Ambulance Service, was critically ill in hospital with coronavirus in March.

He said: “I woke up one day feeling a little bit chestier than usual and it didn’t feel like asthma. The symptoms came on all of a sudden about four hours later. It honestly felt like I had been hit by a bus.”

He was taken to Northwick Park hospital by ambulance colleagues on blue lights and was in a COVID ward for five days. Fortunately Richard recovered and was contacted by NHS Blood and Transplant (NHSBT) as his blood plasma can be transfused into people who still have COVID-19, to potentially save lives.

The 46-year-old said: “‪I’m truly over the moon. Apparently I have enough antibodies to help others.

“I’ve felt so useless not being on the frontline for the first time years – but now at least I can still play my part in helping fight against this awful virus.”

NHSBT is prioritising people with positive tests and men as they are more likely to have high enough antibody levels for the donation to be eligible for use in the trial. If the trial is successful it could be used in hospitals to improve the chances of survival and speed of recovery for coronavirus patients.

Richard, who was born deaf, has spent over 20 years working for London Ambulance Service and works as an acting Clinical Team Manager for the Service’s Motorcycle Response Unit. Before this he also responded as a flight paramedic with London’s Air Ambulance and was the first deaf person to do so.

When staying in the COVID ward and unable to speak Richard was still able to sign to his wife, Marie, via video on his mobile phone. Richard said: “Even though I was unable to see her in person due to the strict restrictions on the ward, it was so comforting being able to still have a conversation with her signing – especially when I couldn’t get the words out to speak.”

As a lip-reader, he did sometimes find it tough in hospital where doctors and nurses would be wearing masks. He said: “It was difficult being able to distinguish who was talking but the nurses and doctors there were so understanding and they would take things a little slower and try to minimise the noise when talking to me.”

After spending five days on the ward Richard was sent back home to Wealdstone to recover with his wife and children by his side. He said: “It was about six weeks until I was able to start to get back into a normal routine and begin doing normal things again.

“I still find it hard walking up the stairs, somethings I wouldn’t even think about before I am finding difficult – the shortness of breath just hits you sometimes.

“I’ve still got a long road to recovery but I know I am one of the lucky ones.”

More plasma donors are needed. Anyone who has had coronavirus, either a test result or the symptoms, can offer to donate at a donor centre by calling 0300 123 23 23 or visiting the NHSBT website.