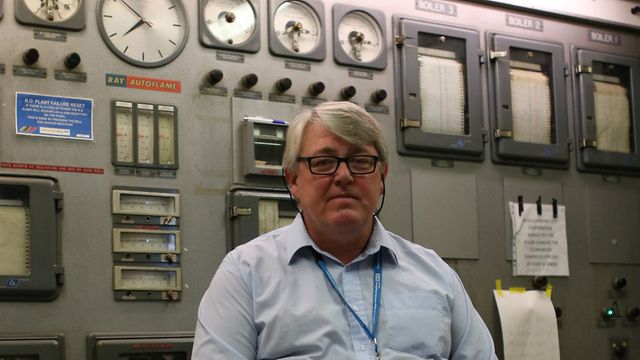 It will be the end of an era when steam boiler engineer Dave Waterman retires.

The 59 year-old has worked at Northwick Park Hospital for more than four decades and the boiler house will go into retirement with him to be replaced by a new energy efficient plant.

“I’m not particularly sentimental but it’s the end of an era for both of us,” reflects Dave who plans to step down next year.

Dave joined Northwick Park as a 16 year-old apprentice. It was the same year that the UK and Iceland squared up to each other over fishing rights in the Cod War and Concorde made her first commercial flight.

His boiler room bosses’ were a group of tough ex-merchant seamen whose salty language included warning the teenager that he’d better not be afraid of getting his hands dirty.

“They weren’t joking. They had me up on the roof on the first day helping dismantle some machinery but the wages were great. I got £38 a week which was double what my friends got.”

“I was a fitter’s mate and fixed everything from wheelchairs to ventilation units. I learnt on the job and studied for my City and Guilds in the evenings.

“It was a very different place then but I learnt at the feet of the masters because people just don’t have those skills anymore.

“There was a lot more manual work in those days and that was reflected in the workforce. It’s a fraction of the size nowadays because most of the work is contracted out and there is a lot more automation.”

It’s been something of a family affair for Dave whose mother and father worked as a cleaner and painter at the hospital in the 1970s.

Dave would let off steam in the social club which was quite a happening place back in the 1970s and 80s.

“The hospital was a lot more social in those days and place was rocking, especially at the weekends. I’ve had some fantastic nights down there and everyone who was anyone would pile in after work. I even met my wife there.”

The heart of the boiler room is its three huge gas/diesel fired boilers that were originally commissioned in 1967 and provide heating and hot water to the hospital via plants in various blocks.

They run constantly throughout the winter months with steam generated from the boilers transported via a network of underground pipes that collectively run for several miles.

Dave spends two months taking each boiler apart for their annual inspection before painstakingly putting them back together.

“I don’t get to do much hands-on maintenance nowadays but it’s still my favourite part of the job.”

Two pieces of equipment that have long since been mothballed are the two incinerators whose distinctive chimneys can still be seen climbing into the sky at the bottom of the hospital site.

An operational incinerator within the M25 was like ‘gold dust’ and Northwick Park charged to dispose of clients’ waste including other hospitals, GP surgeries and London Underground.

Some requests were more unusual than others.

Once a month, an armed police escort would arrive to dispose of seized goods including counterfeit money and drugs.

The yard would be sealed off while material was burnt although Steve and his colleagues inadvertently got to sample some of the wares when an extractor fan broke releasing cannabis fumes into the yard.

The incinerator would consume 14 tonnes of rubbish a day but the fires went out permanently in the early noughties as new environmental guidelines came in driving London’s remaining incinerators out of the capital.

However, the boiler plant still isn’t for the faint-hearted.

The temperature on the inspection walkways above the 20-foot high boilers regularly climbs above 40C during the summer months along with the constant throb of machinery.

So, how is Dave planning to let off steam when he finally retires?

“Music and travelling,” says the life-long reggae and Ska fan.