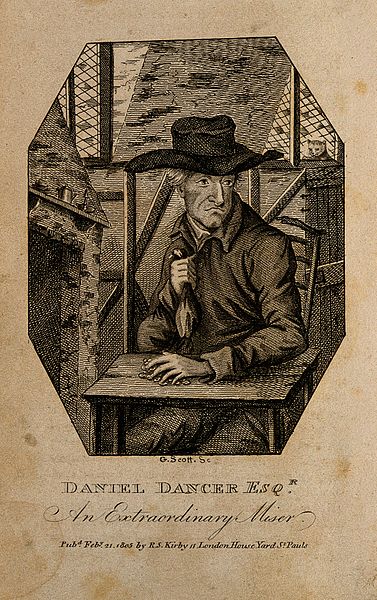 The miser, known as Daniel Dancer, is still known today as one of the most infamous Harrow residents who ever lived.

Harrow’s farming community was approximately fifteen kilometers outside of London, and it was considered a fairly pleasant, quiet place to live. Dancer was the exception to that. His miserly ways were so profound and elaborate, a writer by the names of Charles Dickens thought he might make for an interesting character for a book.

That’s right, Daniel Dancer of Harrow was the inspiration for that famous literary miser Ebenezer Scrooge. However, this isn’t the only interesting fact about Mr. Dancer.

The farmers who lived in the Harrow area enjoyed a nice degree of prosperity. Daniel Dancer inherited his family dealings with his sister, and he could have very easily enjoyed the same kind of life that other farming families in the area enjoyed. However, both he and his sister chose a decidedly different path. To call Dancer a miser would perhaps be something of an understatement.

They lived as though they hadn’t a penny to their names. They wore nothing but the worst of the disintegrating rags they could find. They ate nothing but bones and dumpling that were so boiled, you couldn’t even recognize them.

Mr. Dancer was known for his bone-hunting expeditions throughout the area. He wasn’t against chasing down a dog who had a particularly appealing one. It’s amazing to imagine that Dancer even wanted to take care of his sister, but one can imagine he liked having a free housekeeper. At one point, when she was sick, Daniel Dancer refused to send for a doctor, which led to her death. Dancer’s sister also acted as security, and was known to chase off anyone who came on their property with a pitchfork.

He used wet sand for soap. A hay band was considered a viable alternative to a belt. It’s no surprise that he had few friends. Their neighbors were a brother and sister known as Captain Holmes and Lady Tempest, and these two were the closet things to friends the miser Dancer had in all of Harrow. Dancer also had a servant by the name of Griffiths, who received barely a living wage.

When Dancer died at the age of 78, his fortune amounted to approximately £10,000, an impressive amount. Those who checked Dancer’s home after his death found money hidden away in a variety of strange places.

Some say that the rest of Dancer’s money is still buried in the Harrow area…..