This is the story of a nightmare scenario for one Harrow resident, but with a light at the end of the tunnel if people can help.

Claire Shipp, a 43-year-old mother of a 9-year-old son, born and bred in Harrow, was told her numb fingers were caused by carpal tunnel syndrome, but it now transpires she may only have two years to live.

Claire never imagined her symptoms could in fact be caused by a fast-growing, incurable brain tumour.

Claire is a through and through Harrovian with a large following in Harrow. Born in the borough, she grew up on Courtfield Avenue and has a strong bond with local residents. These include former neighbours, close friends who are like her family and the ‘Courtfield–19’ Band which entirely comprises of residents living on Courtfield Avenue and Courtfield Crescent located on the outskirts of Harrow Town Centre.

The recent devastating news that Claire has incurable brain cancer has devastated the friends and communities in Harrow and elsewhere. Under current NHS treatment, Claire has a life expectancy of just two years at the most.

However, Claire is determined to fight as hard as she can to try and live as long as possible for her beautiful boy, family and friends.

There are new treatments emerging that could help to extend Claire’s life and even beat the odds. However, none of these are currently covered by the NHS so she has to fund this herself.

Campaigns and activities are afoot to fundraise for Claire to give her a lifeline and improve her quality of life. See below.

1. Claire’s own full story is available on Facebook for: Cancer treatment for extra time with my son / www.facebook.com/ClaireShippFundraiser
2. Claire’s plight was made public when she appeared in the Sun publication, read the full story here.
3. Claire’s younger sister Lisa Smith, also a Harrow resident, has set up a fundraising appeal to raise £100,000. To date some £15,000 have been raised. Read more and donate here – https://gofund.me/1480868f
(It has been stated that if, for any reason, we all the money is not used, it will be donated to cancer charities so it will still help people affected by cancer.)
4. One of the first events planned is a fundraising gig at Trinity Bar Harrow on Friday 22nd April 2022. The line-up includes Claire’s sister Lisa Lee featuring The Courtfield-19 WAGS. Beeline, also fronted by Lisa, who will get the crowd going with some pop classics, culminating in a rock n roll extravaganza from Courtfield-19! Tickets are £7 each, there will be a raffle on the night and all the money raised will go to Claire’s fund. 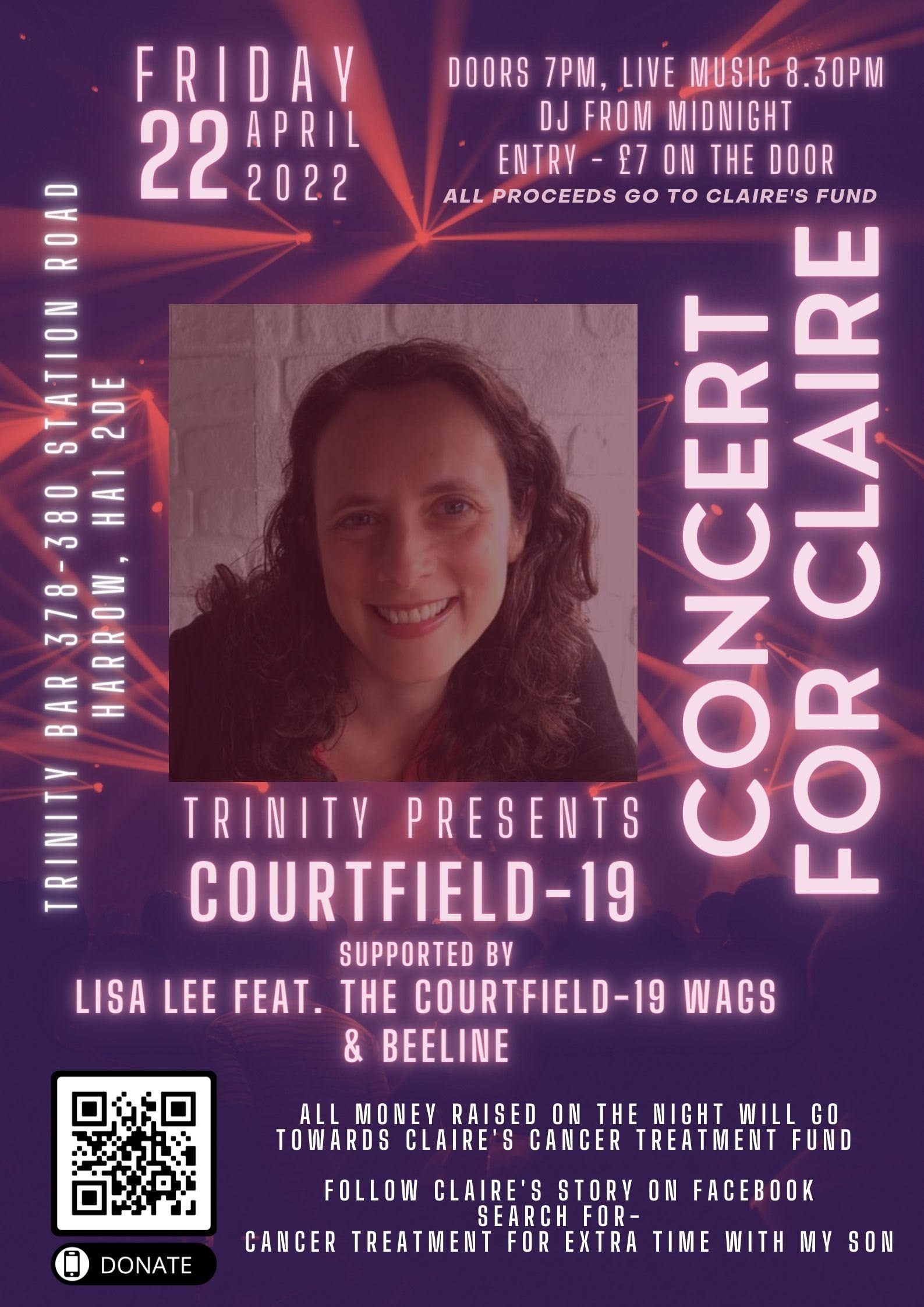 Aneka Shah-Levy, her friend, sister and neighbour said: “Claire’s been more of a sister than a neighbour to me. I’m so very proud to come from a large and remarkable family – my Mum is one of seven and my Dad too is one of seven, however when my parents came to this country (nearly 50yrs ago), they were alone. They made their own family and the very first members were Tony & Anne who had a baby at the time – Claire.

“When I was born, my parents didn’t have a car so it was little Claire who turned up with her father at Northwick Park Hospital to pick me and my mother up when I was born! As it turned out, our families grew even closer as the years went on and we ended up living next door to each other for 20yrs. We spent every Christmas together, birthdays, long summers playing in the street and putting on shows for our parents.

“Never in a million years did we ever imagine that our Claire Bear (as she’s fondly known), who is a bright, vibrant person, would at such a young age be facing an unimaginable tragedy.Determined that Claire is to fight hard – we are solidly behind her to help raise substantial funds to get the urgent and best treatment she can get.

“Friends are the family we choose for ourselves and I want to do everything I can to help my big sister have more time with her beautiful boy Harry and her loving family and friends. There is always the hope of a miracle to cling on to as well and we’re hoping this treatment will give her the best chance possible, but she needs our help to get her there.

“We have been helping to promote Claire’s fundraising efforts on social media and encouraging people to donate generouslyand help raise funds by organising their own events.

“We are also planning our own fundraising events – one of such event is a fantastic fun evening of live music at the Trinity Bar (Claire, Lisa and I spent many a night there back in the day, so seems fitting) on 22 April where our own street band Courtfield–19 will be playing. To show our support, the Courtfield-19 WAGs are also doing a few songs with Lisa’s sister Claire to kick the night off. Raffle tickets are currently on sale for this event as well, so please get in touch.

“If you can’t make the event but would like to buy some tickets – first prize is Cream Tea for Two at the Grimsdyke; second is a Meal for Four at The Castle, plus many more.

“Please come along to enjoy the music and help Claire at the same time. We’d like to think everyone that’s donated prizes for the raffle and Chris Perdue from the Trinity for his support. If you’d like to get involved by organising your own fundraising event, please get in touch via social media  – (www.facebook.com/ClaireShippFundraiser).”