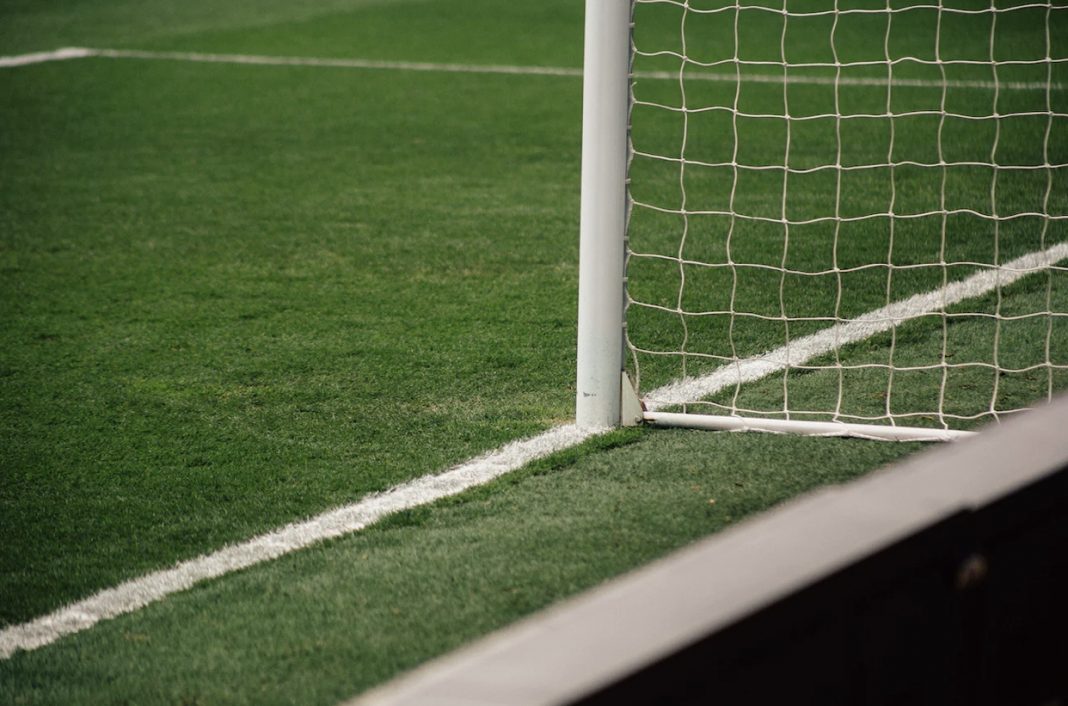 For the third away game running, Harrow were pegged back from a winning position.  Here in The Valleys, they led the game with twelve minutes to go having played some magical football, but then conceded two and, in the end, were somewhat relieved to hear the final whistle.

Wednesday’s game at Swindon Supermarine had deepened the Harrow injury crisis still further, with Kamon-Sherell Assidjo and James Ewington joining James Taylor, Joseph Lawal, Sam Alderson and Shaun Preddie on the list of ‘crocked’.  Jaden Sharman came in as a central defender, with Samuel Adenola reverting to right-back.  Montel Brown led the line, with George Moore and Kai Omoko Brosnan buzzing around in lively fashion behind him.

There was a first minute let-off when Imran Uche missed a through ball and Rees was in on goal.  Jacob Knightbridge saved although the offside flag was then raised.  Powell headed over from Evans’s cross, before Harrow settled and started to create their own opportunities.  A Brosnan shot was deflected for the first of a series of corners.  Ryan-Phillips headed a dangerous Billy Leonard cross over his own bar, and an Uche shot was blocked following the ensuing corner.  Knightbridgesaved Evans’s shot following a left side break, but Borough were back on the offensive with another Uche shot blocked and a Moore effort over the bar from a clever Leonard corner.  Uche made another defensive error when he gave the ball to Powell, Knightbridge saving when the home striker advanced in the inside-right channel.  The same player then headed over at the far post from a deep corner.

Brown’s shot for Harrow was charged down, Evans going close for the Martyrs after beating Isiah Noel-Williams, before Harrow opened the scoring in the 32nd minute, Noel-Williams and Brown creating an opportunity for Moore to hit a precise shot into the bottom corner, past Fuller’s despairing dive, from the edge of the box.  Moore then erred, presenting the ball to Rees, who ran on to shoot across goal, but Harrow doubled their lead in the 40th minute, in bizarre fashion, as home keeper Fuller, on the left edge of his penalty area, rolled the ball to his right straight into the path of Brown, who side-footed it into an unguarded goal from 20 yards.

Ten minutes of first-half stoppage time, given for lengthy treatment for Angel, caught in a brave ‘both men going for the ball with total commitment’ challenge with Moore, saw Uche make a great block from Handley’s vicious shot, and Moore turn and shoot just wide after a lovely build-up involving Leonard and Brosnan.

Harrow played some super stuff when the second half began, probably their best 20 minutes’ football of the season, certainly on a par with their performance at Beaconsfield, but they didn’t get the third goal that would probably have put the game to bed.  Leonard and Moore opened some space for Michael Bryan’s 20 yarderthat came off the rear stanchion, Brosnan then hitting the same piece of woodwork with a similar shot.  Fuller saved Leonard’s low drive, and Moore’s shot was blocked after a good Brosnan run up the left.  John’s free-kick over the bar was a rare threat from the hosts.  Brosnan made a great run up the right to see Fuller bat away his shot, and then ran the length of the field on the left but failed to pick out a colleague with his cross.  That turned out to be his last action, as he was withdrawn in the 66th minute, along with Bryan.  Injuries or tiredness might have been factors but, although Leonard had a shot blocked after a great exchange with Ahmet Biler, Harrow’s threat level was never quite the same again.  A right-wing Merthyr cross led to a big scramble, Sharman eventually clearing, and in the 79th minute, Powell peeled off the Harrow defence at a corner to plant a free header into the goal from 15 yards and bring Merthyr right back into the game.

Late home pressure at Penydarren Park has been a feature of Harrow trips to South Wales, and this was to be no exception, and the withdrawal of Moore, who was on a booking and in danger of dismissal should he have transgressed again, seemed to invite the hosts on even more.  Lene Burden blocked Harris’s shot but, in the 86thminute, with Harrow sitting deeper and deeper, Lewiswas allowed to try his luck from 20 yards, and his shot skidded under a despairing Knightbridge, making it one bad goalkeeping error for each side.

It was heavy home pressure in the final few minutes, including four of stoppage time.  Referee Mr Wilson, a stronger appointee than many seen on Harrow travels to the west, turned down loud home penalty appeals when a home attacker went down under Keegan Bloom’s challenge and, in the dying seconds, Lewis sent a header from a free-kick across the Harrow goal and inches wide of the far post.

Harrow have another away trip this Wednesday when they travel to mid-table Gosport Borough.  Steve Baker will be giving great thought to how his side should go about ‘game managing’ the matches in which they are in control, and also praying that some of his injured troops may be back.